Hero/Villain Dynamics in the 21st Century

On the 14th of september I observed a data leak of the Epik Domain Registrar. What makes this leak interesting to me, is the reason given. First I will talk on the point of Security though... 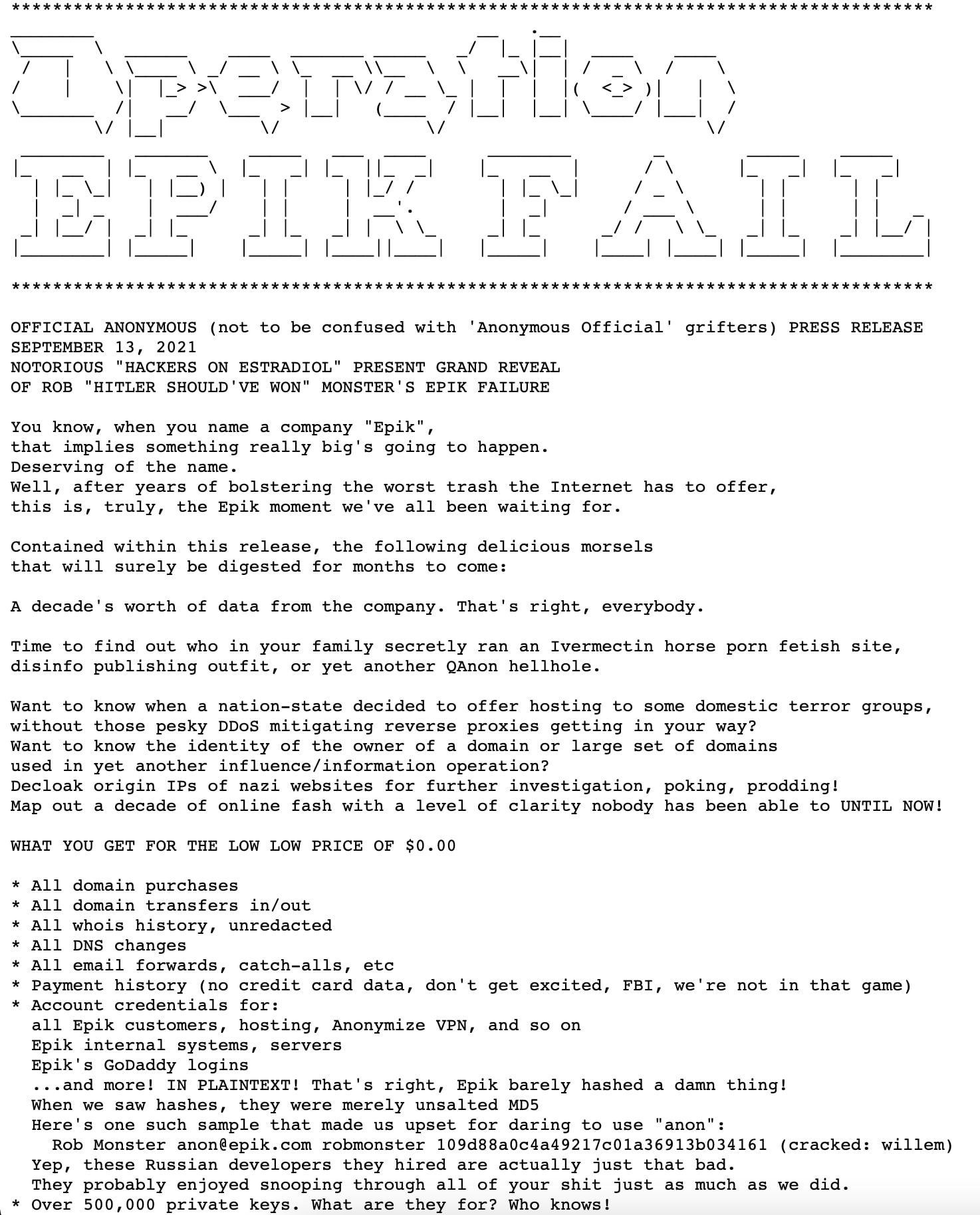 HOW DO YOU FUCK UP SECURITY SO BADLY? Unhashed plaintext passwords are not a standard. It is absolutely terrible OPSEC. There were a few which are hashed in MD5 which is outdated and lots of rainbow tables are available for reversing that. Additionally, the entire /home/ and /root/ directories of one of their core servers are available, along with a lot of sensitive information. Fortunately credit card details aren't included among those details, but since they OPSEC was so poor, I would not be too surprised if these hacktivists responsible did leak those credit card details later on.

So onto the reasoning given. The CEO of the Company, Rob Monster, a Christian Libertarian is likened to a Nazi in the included textfile for the leak. A Christian Libertarian is about as far from a Nazi as you can get aside from their relatively traditionalist religious beliefs. Additionally, the leak seems to imply that those who use Epik as a registrar are associated with the alt-right or conspiracy theorists. I disagree. Epik has simply stood their ground in not removing domains that do not violate their terms of service over the whims of a mob. As such, this provides a lot of interest to those who dislike the tyranny of the masses.

On the topic of standing their ground, Epik refused to take down 8chan until threatened by a company called Voxitility to remove technical support to Epik for their stance. As a result, Epik was forced to take 8chan down, however the lengths to which they stood for the essential freedoms of democracy, namely freedom of expression, speech and belief make it a very nice domain to be on. Unfortunately, their poor security puts me on the look for another politically neutral domain registrar to use.

So why do I bring up the Villain and Hero Dynamics in the title? Because I think this is a case of those dynamics at play. By the hacktivists lumping all users of Epik into the Villain group of the Alt-Right, they have effectively removed all substance. Due to the past nature of Hacktivists and Anonymous they take on the mantle of "Hero", as they were certainly looked up to by impressionable people. As such by leaking the data on political arguments that don't hold up to scrutiny. If anything, they are villains in their own right by inciting doxxing of people, which is a criminal offence in some nations(HK, China) and is plainly seen as bad as the next logical step is violence and abuse of these personal informations.

I question if this is actually "Anonymous" as they have been long since dead for a decade, ever since the phone became mainstream. It is also because this action plays exactly towards giving more control and information for political vigilantes and zealots, which frequently justifies the removal of freedoms as observed by many terrorist actions. It could fairly be argued that this is a CIA or FBI operation to push towards increasingly polarised individuals, under threat of censorship by technocrats... though why a group funded by the tax dollars of a democracy is pushing for more technocratic control is weird. Perhaps a work-around. They can't be authoritarian, but they can be authority over the technocrats. This is all theorising of course, I don't see any evidence of any form other than the circumstantial claim of "Anonymous" which is often only invoked when politically convenient these days.

It's also odd, because this strikes a parallel with what I have been seeing more and more in the Western Political hemisphere. This "we vs them" attitude. We are the hero of our view of the world, they are the villain of this world. It is an incredibly naive outlook on our world, as different systems operate better for different people. This can be plainly seen in the Philippines where the West cherry pick Duterte's speeches to demonise him, while Filipinos continue to support him regardless of the Western outlook because he tackles issues present in SEA, especially given the rising tensions between China and other South-East Asian Countries. Americans find that Democracy works best, and a number of the socialist countries(which do not label themselves as such to avoid association with Communists).

This outlook is problematic and dangerous, and too many people believe that a differing opinion renders you a villain and in absolute opposition. This is the opposite of "tolerance". It makes me truly and utterly angry and furious that such a naive outlook of the world is acted upon in activism to the complete and utter neglect of neutral third parties to the point that those third parties are incorrectly associated with beliefs they do not stand for and are wronged over and over.

Anyway, if people reading this are aware of any Politically Neutral and Secure domain registrars, please do let me know. I would like to improve my Operational Security. For now I stand on Epik. The consequence of being possibly doxxed, is acceptable if a little disturbing, for the gain of my essential freedoms being upheld.

ANTIGONE + MAUDE #16 by Stanley Lieber SENTIENT SLIME Ten years of litigation had finally decided the status of the mall. The debts had been acquired by Mold Industries, Inc., an (among other things) predatory lender out of New York. Reps incoming. Bill Fomo …

'Based' Paganism vs. Christianity

I’ve been meaning to write about Paganism recently. I will frame it as a response to an email I received within the past day or so: Hey Luke, First off, I would like to thank you for all your efforts in making everything you know accessible to everyone. You …

Conciseness is often considered a virtue among hackers and software engineers. FOSS maintainers in particular generally prefer to keep bug reports, questions on mailing lists, discussions in IRC channels, and so on, close to the point and with minimal faff. …